What would you do?

What would you regret

The chances that you take and missed

or the chances you miss and had taken?

What would you mourn

Someone you loved and never get

or someone you get but never love?

What would you love

The feelings that were touching

or the touch that never had a feeling?

What would you wish

A prayer that never got fulfilled

or fulfilment which you never prayed?

And the day appeared when the death was kind..
She told she’ll be returning, while you take your own sweet time..
Take a moment to gasp, ponder and breathe,
What’s been missing all these years and what’s more beneath..
I give you more mornings to feel the air..
Express the love and memories you shared.
But later when the dusk arrives..
the threatened soul, the relentless effort strives..
the last battle was won, but we lost this war..
She didn’t say a word, but loosened the reins on her pale white horse..
The unsaid words and some untold stories still remain..
cremated and gone but yet not gone..
Living it everyday.. down the memory lane..
Dated: July 2016
Posted by Mansi at 11:45 AM No comments:

​
Ride along means spending a shift (usually an 8 hour shift) with a police officer to understand and observe their duties and day to day activity. I was always curious about this and wanted to do it.

I happened to meet the Chief of Los Angeles County's Sheriff Department in one of the conferences.
As much as she liked an engineer, I liked to ask about sheriff's work. So I asked her if she could arrange a ride-along for me. She immediately redirected me to a Sargent who got me scheduled at the East Los Angeles Sheriff Station. Viola! 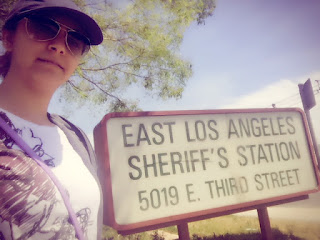 They asked me to provide my CA driver's licence which they keep until the shift is complete and sign a waiver form which states that during ride-along there may be threat or danger to your life and that they are not liable to any loss.

While waiting at the station, I saw a lot of people coming to find out about their family members who have been arrested and detained. They wanted to know the reason for their custody. Most of them happened to be Latinos. They would use a black phone to dial an extension where they could talk to the jailer and get direction for the next steps.

There is a deputy explorer program where new applicants can go and apply. The URL for it is explorers.lasd.org. 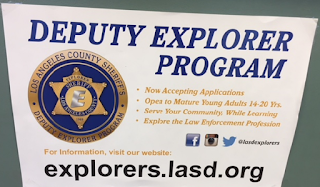 My shift was supposed to be from 2 pm to 10 pm covering East LA areas (which I guess is supposed to be dangerous side of LA!). The deputy came to get me from the front of the station and there began the journey! 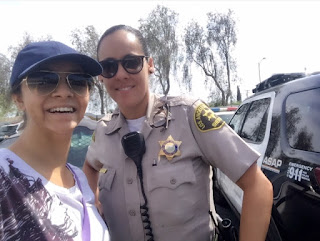 She showed her laptop deployed in the car (Panasonic with DOS system along with AT&T wireless  - Both the companies I have worked for!) which had various tabs and codes, like (O) meant observation when they would have to stop suspicious people on the streets. With the new law, after every observation they are supposed to fill in some 20 questions about the person they cited. This is mostly for tacking, reporting and analytics purposes. When they turned on the siren, it gets tracked too. She explained how she has two walkie talkies - one for the district and other for the county (which had a central operator)
I noticed a gun in between the two seat. She said it was a loaded shot-gun.

Then came a message on a screen that we had to drive to a place where 4 males and 1 female were fighting on the street and there was a gun involved. The system also had a detailed description of one of the person describing what he looked like, what was he wearing. 6 police cars were deployed to this location. But by the time we reached the fight was over and the place was cleared. No fun.

We took a lunch break and talked to another deputy while discussing various loopholes in the law! ;)

Later in the evening, we went to a Hispanic house where a guy had an allegation for not feeding and taking care of his grandparent. Some spooky place it was. While driving through that neighborhood, we crossed a house where the music was too loud and these people were all partying. They were told to lower the music. A drunk Latino guy came out right next to our car window which was rolled down (yes it was next to my face!) to ask if music was the only problem. It was intimidating but we were fine. 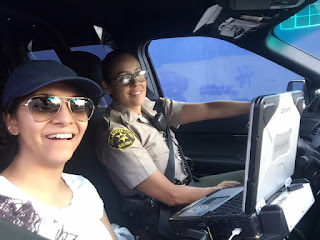 We went to Maywood, Commerce and some areas around that. All throughout the deputy was super friendly. She was a trump supporter and I was not. But then I wanna in her car and she is a police office with a loaded gun. 👀 Just Kidding. She was open to have a healthy political discussion.

Overall, it was a great experience! Worth doing it once in your life. :)

If you would like to try it, go to:

It feels like it happened just yesterday..
As I remember every second so crystal clear
The time slowed down, the voices less heard,
I could hear my heartbeat but rest of the body all numb.
Some things could make sense but most couldn't,
Because I couldn't accept the fact that the battle was over and defeat was marked.
It's over.
But then I started seeing you everywhere..
More than I could see you before..
In the reflection off the back of the gleaming spoon..
In a gesture my sister makes..
In the arch of my lips when I'm stressed..
Through the brush strokes of paintings you have made..
In the tone of my mother, the strongest person you made..
You are still around in our every breath..
There were valleys and peaks I crossed this year,
Felt like you helped me climb the mountains with no fear..
A rebel, a fighter you taught us to be..
You are still in our hearts and mind.. and will always be..
Love,
Your Daughter
Posted by Mansi at 2:39 PM No comments: